Tim Barringer is Paul Mellon Professor of the History of Art. He specializes in the art of Britain and the British Empire since 1700, and nineteenth-century American art. Following positions at the Victoria and Albert Museum, the Universities of London and Birmingham in Great Britain, he came to Yale in 1998. In 2009 Tim Barringer was Slade Professor at the University of Cambridge. In 2013-14 he held a J. Clawson Mills Fellowship at the Metropolitan Museum of Art, New York. In 2019 he delivered the Paul Mellon Lectures at the National Gallery in London.  He has held visiting professorships at York and Bristol Universities in the UK.

His books include ‘Reading the Pre-Raphaelites’ (Yale, 1998), ‘Men at Work: Art and Labour in Victorian Britain’ (Yale, 2005) and ‘David Hockney: 82 Portraits and 1 Still Life (Royal Academy, 2016). Co-edited collections of essays include ‘Colonialism and the Object’; ‘Frederic Leighton: Antiquity, Renaissance, Modernity’, and ‘Writing the Pre-Raphaelites.’ With co-editors Geoff Quilley and Douglas Fordham, he published Art and the British Empire in 2007. In 2018, a collection of essays ‘Victorian Jamaica’ (co-edited with Wayne Modest) was published by Duke University Press. ‘On the Viewing Platform: The Panorama from Canvas to Screen’(co-edited with Katie Trumpener) appeared with Yale University Press in 2020.

Barringer was curator with Andrew Wilton, ‘American Sublime: Landscape Painting in the United States, 1825-1880’ (London: Tate; Philadelphia, Minneapolis, 2002). With Gillian Forrester and Barbaro Martinez-Ruiz, he curated ‘Art and Emancipation in Jamaica: Isaac Mendes Belisario and his Worlds’, (Yale, 2007). The accompanying book was awarded the Alfred Barr Prize of the College Art Association. With Alison Smith and Jason Rosenfeld, he curated ‘Pre-Raphaelites: Victorian Avant-Garde at Tate Britain’, London; National Gallery of Art, Washington DC; Pushkin Museum, Moscow; Mori Arts Center, Toyko, and Palazzo Chiablese, Turin, 2012-13. He was curator of ‘Pastures Green and Dark, Satanic Mills’, an exhibition of landscape painting from the National Museum of Wales at Princeton University Art Museum and other venues in 2015-16. In 2018 he was curator, with Elizabeth Kornhauser, of ‘Thomas Cole’s Journey: Atlantic Crossings’ at the Metropolitan Museum of Art and the National Gallery in London. He also worked with a Yale team to curate ‘Picturesque and Sublime: Thomas Cole’s Transatlantic Inheritance’ at the Thomas Cole Historic Site in Catskill, NY. Most recently he co-curated Unto This Last: Two Hundred Years of John Ruskin with Tara Contractor, Victoria Hepburn Judith Stapleton and Courtney S. Long (Yale Center for British Art, 2019). In 2019-22 an exhibition co-curated with Victoria Osborne and Martin Ellis, ‘Radical Victorians’ toured the USA. All these exhibitions were accompanied by publications.

Tim Barringer has served as advisor or co-advisor for 25 completed Ph.D. dissertations at Yale, served as Director of Undergraduate Studies, Director of Graduate Studies and, for six years until 2021, as Chair of the History of Art Department. He was winner of the Sarai Ribicoff teaching prize in 2004.

Selected recent publications include “Landscape and the Problem of History: Thomas Cole and Anglo-Atlantic Modernity,” in Mark Salber Phillips and Jordan Baer, What Was History Painting, and What Is It Now (Montreal: McGill-Queens University Press, 2019), 131-152; “A Radical Legacy: The British Pre-Raphaelites and Global Pre-Raphaelitism,” in Linda Ferber and Nancy K. Anderson, eds., The American Pre-Raphaelites: Radical Realists (Washington DC: National Gallery of Art, 2019), 18-37 and “Landscape Then and Now,” British Art Studies, Issue 10, 2018 https://doi.org/10.17658/issn.2058-5462/issue-10/tbarringer, as well as introductions to exhibition catalogues of artists Derek Hyatt and Malcolm Morley. 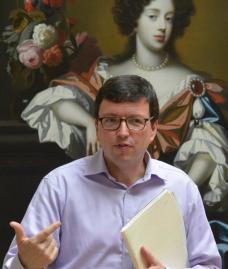 Art and the British Empire
2009

Art and Emancipation in Jamaica
2007