Sharon Mizbani is a Ph.D. student specializing in the comparative architectural history of the late Ottoman Empire and Qajar Iran, with a particular focus on the development of urban water infrastructure and related monuments during the 19th and 20th centuries. Her research explores the intersections between infrastructure and architectural heritage, and connects Ottoman and Iranian water infrastructures to broader aesthetic, social, and environmental questions. In 2021, she presented aspects of her current research at the “Voices of Emerging Scholars” seminar series, hosted by the Columbia Global Center in Istanbul, and an article based off of this presentation entitled “The Art of Infrastructure: Hamidiye Fountains in Late-Ottoman Istanbul” was published in the Journal of the Ottoman and Turkish Studies Association.

In addition, she has presented research at the 2020 Middle East Librarians’ Association Annual Conference on Yale’s collections of Ottoman manuscripts, and as a doctoral student has organized the Single-Slide Sohbat graduate workshop in 2021 and the 18th and 19th Century Colloquium: Vital Conversations, Visual and Structural Legacies for the 2020-2021 academic year.

She received her B.A. from the University of Toronto, with a double major in Near and Middle Eastern Civilizations and Political Science, and with a minor in History. In 2015, she was the recipient of a Social Sciences and Humanities Research Council grant which supported her Master’s research, also at the University of Toronto. During this time, she received the Turkish Community Scholarship for her community outreach. Subsequently, she was affiliated with Boğaziçi University in Istanbul for a semester of coursework. 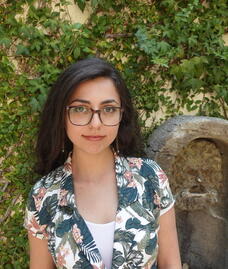