Théo de Luca studies French painting from the seventeenth century through the early twentieth century. His research interests also encompass the Italian High Renaissance, the Baroque, Zen ink painting in Japan, postwar European and American painting and sculpture, the bonds between pre-Modern and Modern art, the history of collecting, as well as the concepts of space and time.

He received a B.A. in History of Art and Archaeology with a minor in Aesthetics from the Université Paris I – Panthéon-Sorbonne, after completing his years of Lettres Supérieures and Première Supérieure at the Lycée Montaigne in Bordeaux. He also holds a Maîtrise in History of Art from the École des Hautes Études en Sciences Sociales (EHESS) in Paris, and an M.A. in History of Art with Distinction from University College London (UCL), where his research was supervised by Professor Briony Fer. At Yale, he is the current recipient of the Berthe Corr and James Corr Memorial Fellowship.

Prior to his joining Yale’s doctoral program in History of Art, the Verlag der Buchhandlung Walther König in Cologne published in January 2020 Théo de Luca’s debut book on the seminal 1981 exhibition ‘A New Spirit in Painting,’ which he presented at London’s Royal Academy of Arts (RA). A New Spirit in Painting, 1981: On Being an Antimodern features an essay he authored, as well as interviews he conducted with Georg Baselitz, Rainer Fetting, Anthony d’Offay, Thaddaeus Ropac, Jean-Louis Froment, Tim Marlow, Sir Norman Rosenthal, and Sir Nicholas Serota.

Théo de Luca also worked with the Director of Bordeaux’s CAPC Musée d’Art Contemporain on the preparation of major international exhibitions in collaboration with institutions such as the Los Angeles County Museum of Art (LACMA), Berlin’s KW Institute for Contemporary Art, and Madrid’s Museo Reina Sofía. He later was a Member of the Sales & Curatorial Team at Galerie Thaddaeus Ropac (London, Paris, Salzburg), where he specialized in the work of German artist Joseph Beuys.

In 2021, he collaborated with Almine Rech Gallery in Paris, Aspen, and New York, writing essays for monographic and group exhibitions. These included focuses on painters such as Günther Förg, Alejandro Cardenas, and Nathaniel Mary Quinn, as well as a Salon de Peinture, which brought together artists based in France, the United States, Ireland, Britain, Germany, and China.

Most recently, his work has been featured in publications about European painting. He authored the exhibition catalogue Michael Werner Gallery published on the occasion of German painter Florian Krewer’s second solo show in London. A conversation between French painter Claire Tabouret and Théo de Luca appears in the catalogue Almine Rech Gallery published for Claire Tabouret’s coincidental exhibitions in Paris at the gallery’s Marais district location and the Musée Picasso. 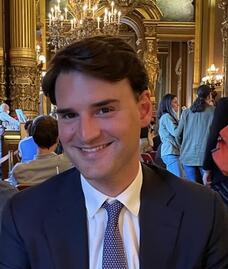