Stephanie Wisowaty is a fourth-year PhD candidate in the History of Art Department,

specializing in medieval art with a particular focus on Italy. Her dissertation explores the

fourteenth-century Italy. The project investigates how such objects invited a multisensorial and

imaginative devotional process, and how they participated in and contributed to the artistic

with Distinction in the History of Art from the Courtauld Institute of Art supervised by Prof.

Joanna Cannon (2017). In 2016 she curated an exhibition at the Yale University Art Gallery

(Vienna). As of March 2022 Stephanie is a two-year Predoctoral Fellow at the Bibliotheca 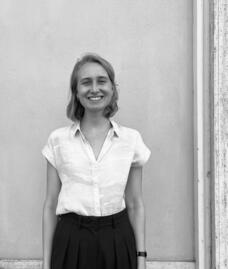