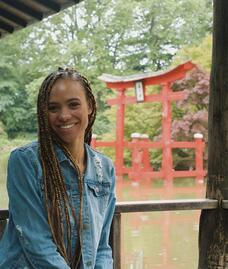 Vu Horwitz’s research is concerned with the impact of social and political change on the production of meaning and ‘value’ for art objects from across Africa. Her aim is to produce research that de-hegemonizes the field and adds to its complexity. She focuses on how colonially-generated collections of ‘art’ objects from central Africa can be interpreted and (re)configured in ways that decolonise the practice of Art History. She is particularly interested in studying objects, images and archives from contexts in which indigenous communities interacted with missionaries. Horwitz received a Master of Arts (with Distinction) in History of Art from the University of the Witwatersrand in 2019, and a BA (Hons) in the same subject in 2015. She completed her undergraduate studies at the University of Cape Town in 2014. She was awarded the Stein-Lessing Scholarship (2015), and the Standard Bank Group African Art Essay Prize (2016). Horwitz curated the Public Programme for the RMB Turbine Art Fair in 2019, and in 2016/2017 she undertook a pre-doctoral research fellowship as part of The Arts of Africa and the Global South Programme at Rhodes University. She has presented research papers at a number of conferences, including the South African Visual Art Historians (SAVAH), and the Arts Council of the African Studies Association (ACASA), and her research has been published in African Arts (2017), and in two books produced by the Wits Art Museum (2016; forthcoming 2021). Before studying at Yale, she was a lecturer in History of Art at the University of Johannesburg (2017-2020) where her focus was re-orienting the curriculum towards, and with, an Afro-centric pedagogy.