Kathleen Quaintance is a historian of modern visual culture, a critic, and a craftsperson. Kathleen works on twentieth-century conversations between the precariously delineated and often fluid spheres of art, craft, and design. To complicate these boundaries, Kathleen’s recent research has focused on how a consciousness attuned toward pattern and decoration might simultaneously function as a material craft study and as an alternative epistemology, disrupting masculinized narratives of whitewashed, ornament-suppressing modernism.  Within a trans-regional context of the twentieth century, Kathleen explores how lesser-known women designers in the first half of the twentieth century used regional popular art, everyday objects, industrial machine processes, and high-modernist developments simultaneously in their pattern design. This research tends to subvert modern notions of individualistic artistic production by focusing on women who have not been allotted traditional training in architecture but nevertheless contributed to the built world, women who were trained as fine artists but chose to pursue craft practice instead as an alternative avenue, and women who worked as art educators, employing their pedagogic tactics toward the development of modern visual culture. This research maintains a central focus on materiality and a reflexive understanding of art’s epistemologies, which fosters the development of a critical, reflexive view which resists tendencies toward gender essentialization and/or uncritical reclamation in women’s art history.

Kathleen’s master’s dissertation, The Living Fire that Shapes the Pattern: Women designers and pattern-consciousness in modern Britain, 1925-1958, explored histories of art and craft within networks of women designers in Interwar Britain who used pattern as an idiom. This research stemmed from a longer engagement with woodblock-printed textiles created in collective contexts, which has found expression in both written research and in material, hand-made textile form. One of Kathleen’s central passions as an art historian is the incorporation of practice-based research into the field. As a craftsperson, Kathleen’s work includes (but is not limited to) needle, loom, print, metal, and wood.

More widely, Kathleen also often considers complicating modernism(s) in architectural history, material marginalities, artistic labour and workshop practice, and dissecting epistemologies of art. Kathleen completed an MSt in Women’s, Gender and Sexuality Studies at the University of Oxford as an Ertegun Scholar, and a BA with a concentration in Art History at Sarah Lawrence College. Both courses were interdisciplinary programs which allowed for explorations of how developments in other humanities fields might productively influence new methodologies in art history. Kathleen has also worked as a printmaking studio technician, a craft teacher, a poster designer, an assistant curator of a collection of modern British art held at Lady Margaret Hall, Oxford, a historical research assistant to a creative writer, and a museum educator. 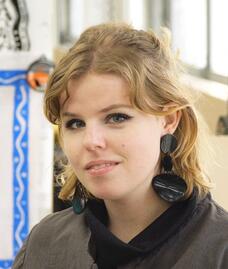