Isabella Galdone studies nineteenth-century British art and material culture. Her research thus far has focused primarily on female creators associated with the Pre-Raphaelite movement. Before beginning her PhD studies at Yale, she received a BA in History of Art and French Studies from Smith College and spent a year abroad at Université Paris-Sorbonne. She went on to earn an MA with Distinction from the University of York, focusing her studies on nineteenth century British painting, as well as thirteenth and fourteenth-century British sculpture and marginalia. Her MA thesis focused on nineteenth-century artist and poet Elizabeth Eleanor Siddall’s use of the material and corporeal to communicate immaterial concepts such as spiritual identity, moral character and gendered experience.

Isabella’s current work consists of a continuing study of Siddall, as well as the exploration of productive methodologies for discussing artists whose biographies and bodies of work exist in a fragmented state of preservation. Other interests include textile production and consumption in the British Empire and the Atlantic world, the role of women’s labor and narratives of ethical consumerism in the nineteenth-century British garment industry, and theories of the Gothic 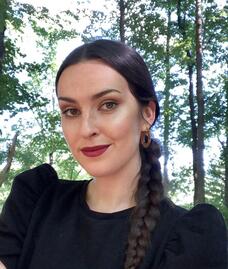