Faraz Olfat is a PhD student in the History of Art with a focus on the history of Modern architecture, design and material culture. His scholarship is centered around architectural advancements in the second half of the nineteenth century in Europe and the Middle East in light of rising nationalism and socio-cultural transformations. Having completed his MA at the Courtauld Institute of Art in 2019, specializing in German Modernism, he is interested in a broader global dialogue of Modernism and its socio-political and cultural implications.In approaching these concepts, he examines issues of global exchange and the importation of Western modernity to Iran in the late nineteenth and early twentieth century.

Trained in the discipline of architecture, Faraz is also interested in the historical approaches of architectural professionals to style and the question of national identity. He addresses such efforts in formulating a national style in the age of modernity for new nation-states of the nineteenth and the twentieth centuries. Particularly the stylistic shifts that reflect the complex relationship of the urban bourgeoisie with political power and their crystallization in a complex and symbolistic visual repertoire and architectural ornament, in cases such as his native Iran. By investigating these themes, he aims to shine light on issues regarding the adaptation of a modern style by authoritarian regimes in government sponsored architecture to bridge cultural, racial, and ethnic differences in blending the urban landscape to create an illusion of socio-political homogeneity. 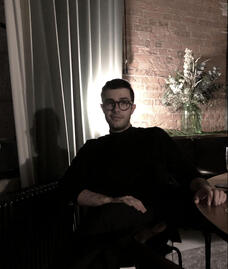