Blair Katherine Betik studies ancient Roman art. Her research focuses on the sacred sculpture and space of the Roman provinces (particularly Syria, Britain, and Greece), the representation and experience of ritual in the Mediterranean world, and the legacy of violence and colonialism in the discipline of Greco-Roman archaeology. Blair’s dissertation examines altars excavated in association with military populations in the Roman provinces, considering the visual and sensory reception of these ubiquitous sculptural objects by worshippers in the 1st-4th centuries CE.

Beyond her area of specialization, Blair is committed to interdisciplinarity in the study of material culture. At Yale she has worked as a Graduate Curatorial Intern in the Ancient Art department at the Yale University Art Gallery, co-organized the Yale History of Art Museum Forum and the Pre/Early Modern Forum, and is enrolled in the ARCHAIA certificate program. Blair has experience in both geoarchaeology and paleoarchaeology laboratories at SMU and Yale, respectively, and excavated with the Mohegan Archaeology Project in 2017. Born and raised in rural Texas, Blair is committed to critically thinking about and advocating for access to cultural institutions and non-traditional spaces for education.

Blair holds BAs in Art History and Anthropology from Southern Methodist University in Dallas, Texas and an MSt in Classical Archaeology from Brasenose College, University of Oxford. During the 2022-2023 academic year, she will attend the Summer Session at the American Academy in Rome and will be enrolled on the Yale-University College London graduate exchange program. 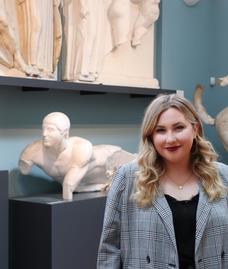