Sadako Ohki, the Japan Foundation Associate Curator of Japanese Art, received her master’s and doctoral degrees in History of Art from the University of Michigan. Ohki wrote her doctoral thesis on Ike Taiga’s calligraphy, reflecting a lifelong interest in calligraphy and ink art. She contributed an essay on Taiga to Ike Taiga and Tokuyama Gyokuran: Japanese Masters of the Brush (Philadelphia Museum of Art, 2007); on British abstract artist Rebecca Salter and her interest in Japan to Rebecca Salter: Into the Light of Things (Yale Center for British Art, 2011); and on Konoe Nobutada to the magazine Orientations (2012). Her exhibitions at the Gallery include Tea Culture of Japan: “Chanoyu” Past and Present (2009), which was accompanied by an exhibition catalogue, and, most recently, the three-part exhibition Byobu: The Grandeur of Japanese Screens (2014). 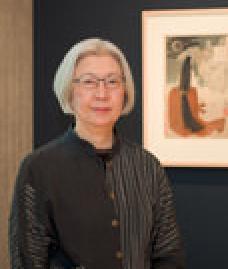