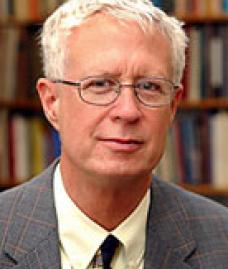 Robert Nelson studied and taught medieval art, mainly in the Eastern Mediterranean, and the history and methods of art history. He was the co-curator of Holy Image, Hallowed Ground: Icons from Sinai at the J. Paul Getty Museum in 2006-2007. His book, Hagia Sophia, 1850-1950, 2004, asks how the cathedral of Constantinople, once ignored or despised, came to be regarded as one of the great monuments of world architecture.  Current projects involve the history of the Greek lectionary, the reuse of Byzantine art in Venice, the social lives of illuminated Greek manuscripts in Byzantium and their reception in Renaissance Italy and the collecting of Byzantine art in twentieth-century Europe and America.

Editor, Visuality Before and Beyond the Renaissance: Seeing as Others Saw, New York, 2000.

Co-edited with Sharon Gerstel, Approaching the Holy Mountain: Art and Liturgy at St. Catherine’s Monastery in the Sinai. Turnhout, 2011.

“Letters and Language/Ornament and Identity in Byzantium and Islam,” in The Experience of Islamic Art on the Margins of Islam, ed. Irene A. Bierman, Reading, 2005, 61-88.

“Royal Tyler and the Bliss Collection of Byzantine Art,” in James N. Carder, ed., A Home of the Humanities: The Collecting and Patronage of Mildred and Robert Woods Bliss, Washington, D.C.: Dumbarton Oaks Research Library and Collection, 2010, 27-50.