Mimi Yiengpruksawan completed graduate work under the direction of Donald F. McCallum at the University of California, Los Angeles, with a Ph.D. in Japanese art history awarded in 1988. For her undergraduate degree at Occidental College she majored in medieval European art. In 1971 she entered the Master of Arts program at the University of California, Los Angeles, in the combined fields of East Asian, African, Oceanic, and Pre-Columbian art, for which she received her M.A. degree in 1975. She lived in Japan from 1975 through 1984, taking time off from her academic work to travel and write, and has continued to traveled extensively and conduct research in China, Tibet, India, Cambodia, and Thailand. Yiengpruksawan joined the Department of the History of Art at Yale University in 1990 and was awarded tenure in 1998. She is affiliated with the Department of East Asian Languages and Literatures, the Council on East Asian Studies, the Council on Southeast Asian Studies, and the Program in Medieval Studies.

Yiengpruksawan’s academic interests focus on the art histories of Buddhism in the nonmodern period, primarily in the Japanese context, but also encompassing Eurasian components with emphasis on the Silk Roads network. She takes her cue from the Heian-period statesman Fujiwara no Michinaga, who on presenting his bona fides in 1007, described Japan as a country on the Buddhist continent of Jambudvīpa, that’s to say, as part of a greater Buddhist cosmopolis comprised of many nationalities and ethnicities. In so doing Yiengpruksawan brings a cross-regional and interdisciplinary approach to her work which emphasizes contact and exchange, not isolation, as the engines driving cultural formation, in tandem with stochastic and exogenous interventions including environmental and anthropogenic crisis.

For more than a decade Yiengpruksawan has been working on a pair of book manuscripts based on her close reading of primary materials, including the diaries and other records of the men and women who ruled Kyoto at the turn of the eleventh century. This project includes a concomitant reconceptualization of the visual archive as it has been shaped by modern assumptions about the Japanese past. The first manuscript, Michinaga’s Peacocks: A Heian World in Transition, considers the role of exogenous interventions, from environmental catastrophe to burgeoning commercial and monastic exchange with the continent, in the shaping of art and patronage in Kyoto in the era of the supernova of 1006. The second manuscript, Kyoto in the Twilight of the Dharma, takes up the patronage activities of two celebrated figures in Japanese cultural history—Empress Fujiwara no Akiko, and her younger brother Fujiwara no Yorimichi—at a moment when it was widely prophesied that the Buddhist eschaton would begin in 1051. Both manuscripts aim to engage the field of Japanese art studies in a rethinking of how we figure the world which gave rise to The Tale of Genji and Yorimichi’s Phoenix Hall at Byōdōin in Uji—a rethinking which hopefully will spur a critical look at modern theorizing about Heian Japan.

While most of her work to date has focused almost entirely on Heian Japan, and specifically on Buddhist art and culture from a cross-border perspective, Yiengpruksawan has recently returned to a longstanding research interest in the intersections of art, religion, science, commerce, war, and diplomacy at Kyoto and Nagasaki in the age of Japanese, Chinese, Portuguese, Spanish, Dutch, and English political and mercantile interaction in the sixteenth and seventeenth centuries. Her point of entry into this material is the overdetermined nature of visual production and reception in Japan at a tipping point in the emergence of global modernity, when what were called the Nanbans—“Southern Barbarians,” i.e. Europeans—began to arrive in Japan. In other words she is interested in how Japan and Japanese artifacts, along with objects and materials from other places, figured in a greater community of exchange, friction, confrontation, conquest, and adaptation in times when Portuguese marauders, Jesuit missionaries, Muslim traders, and Japanese pirates found themselves in the same waters, on ships laden with goods, making landfall in the domains of some of Japan’s most charismatic military hegemons.

Yiengpruksawan’s possible fields for advising include but are not limited to: Japanese Art, East Asian Art, Buddhist Art, and Arts of the Silk Road.

“Environment, Contingency, and Improvisation at the Heian Court in the Time of the Supernova,” in Hannah Baader, Sugata Ray, and Gerhard Wolf, eds. Ecologies, Aesthetics, and Histories of Art, De Gruyter (2022)

“Mañjuśrī’s Many Marvels: A Japanese Case Study on the Wutaishan Phenomenon in the Age of the Final Dharma,” in Jinhua Chen et al., ed. Second Proceedings of the Wutaishan Institute (2020)

“Countdown to 1051: Some Preliminary Thoughts on the Periodization of the Buddhist Eschaton in Heian and Liao,” pp. 337-402, in Haun Saussy, ed. Texts and Transformations, Cambria Press, 2018 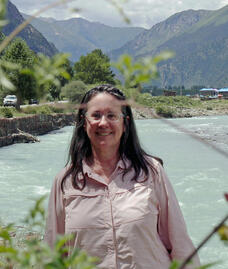