Jacqueline Jung specializes in the art and architecture of medieval Europe, with an emphasis on the figural arts of Gothic France and Germany. My teaching encompasses the history of medieval sculpture; images of death and apocalypse; Gothic cathedrals and their affiliated arts; the body as medium and matter in the Middle Ages; monumental narrative arts; late medieval altarpieces; visions and visionary experiences in art; the portrayal and provocation of emotions in medieval art; depictions of marginalized people in medieval Christian art; and the importance of materiality, movement, and space in medieval visual culture. I’ve recently developed a 100-level course introducing students to sacred art and architecture in the various cultures covered by expert faculty in our department, from the pyramids of Egypt to the World Trade Center Memorial in Manhattan. In spring 2023 I look forward to teaching an interdisciplinary graduate seminar on art and race in medieval Europe.

My recent book, Eloquent Bodies: Movement, Expression, and the Human Figure in Gothic Sculpture (Yale University Press, 2020), offers new ways of looking at monumental sculptural arts in medieval Germany and France, exploring the diverse facets of sensory, physical, and affective experience they suggest and provoke. My first book, The Gothic Screen: Sculpture, Space, and Community in French and German Cathedrals, ca. 1200-1400 (Cambridge University Press, 2013), examined the ways in which the lavishly decorated partitions inside Gothic buildings served not only to create discrete liturgical zones but also to unify lay and clerical audiences around a common focal point inside the church. It received the Samuel and Ronnie Heyman Prize for Outstanding Scholarly Publication at Yale, the PROSE Award for Best Book in Art History and Criticism from the Association of American Publishers, and the John Nicholas Brown Award for a First Book from the Medieval Academy of America. In smaller-scale studies I’ve addressed questions of tactility and embodied imagination in medieval devotional arts; questions of female agency as rendered in didactic and hagiographical manuscript illuminations; materiality and spiritual pregnancy in late medieval convents; and imagery of pilgrimage, preaching, and sex on a small Spanish portal.

In my own scholarship German art historical writings have been essential; there are many areas of art historical inquiry in my field (including on topics well beyond Germany) that one cannot study without reading knowledge of this language. (Students who might be interested in working with me, take note!) I have translated several seminal art-historical studies from German, most notably Aloïs Riegl’s Historical Grammar of the Visual Arts (Zone, 2004; paperback edition released in March 2021). The history of Art History remains of special interest to me, particularly the ways in which photography and other forms of reproduction mediate works of art to far-flung audiences, and the ways that nationalistic politics of the nineteenth and early twentieth centuries shaped how medieval European art has been understood up to the present. We can only apprehend the medieval through the filter of the modern, and attending to the sometimes overt and sometimes subtle ways in which these domains seep into one another is one of the most exciting aspects of research in this field.

Although my passion is for monumental Gothic architecture and sculpture, my graduate advising has covered much wider terrain. I’ve directed or am currently advising dissertations on German Romanesque portal sculptures and questions of law (Stephanie Luther, PhD 2015); the symbolism and materiality of wood in late Gothic altarpieces (Gregory Bryda, PhD 2016); the links among late medieval reliquaries, automata, and puppets (Michelle Oing, PhD 2020); performance and authorship in the Manesse Songbook (Dennis Lyle Dechant); life-sized scultural Deposition Groups in Italy and Spain (Anabelle Gambert-Jouan); the materiality and meaning of historiated wooden doors across Europe (Katherine Werwie); liturgical objects and their use in eleventh- and twelfth-century German convents (Kristina Potuckova); speech and inscriptions in the textiles and wall-paintings of late medieval German convents (Kristen Herdman); and the material and devotional agency of double-sided painted processional crucifixes in Italian Dominican churches (Stephanie Wisowaty).

As the field of medieval art history (and, on a microscale, my own teaching trajectory) evolves, I look forward to continuing to work with students both within Europe and across the vast geographical and cultural terrains of the medieval world. I’m especially eager to work with people who bring new questions and perspectives to familiar materials, those who are driven to explore areas of medieval art that have fallen between the cracks, and those who explore the affinities, connections, and tensions between the arts of medieval Christian Europe and those beyond its boundaries. The field of medieval art history looks very different today than when I entered graduate school; so many new paths are open. As a musician friend likes to say, “Play it weird.” Surprise me. Let’s build something new, together.

“The Work of Gothic Sculpture in the Age of its Photographic Reproduction,” in The Lives and Afterlives of Medieval Iconography, ed. Pamela A. Patton and Henry D. Schilb (University Park: Pennsylvania State University Press, 2021), 161-94.

“The Boots of St. Hedwig: Thoughts on the Limits of the Agency of Things,” in The Agency of Things in Medieval and Early Modern Art: Materials, Power and Manipulation, ed. Grażyna Jurkowlaniec, Ika Matyjaszkiewicz, and Zuzanna Sarnecka (New York: Routledge, 2018), 173-96. 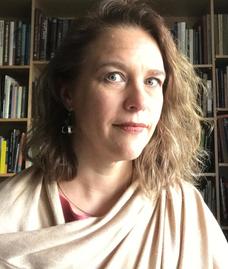 Historical Grammer of the Visual Arts
2004 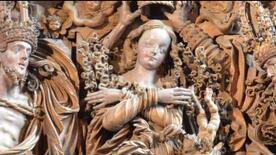 The Medieval Choir Screen in Sacred Space: The Dynamic Interiors of Vezzolano and Breisach