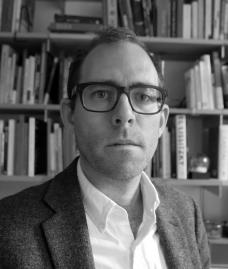 His recent book Graphic Assembly: Montage, Media and Experimental Architecture in the 1960s (University of Minnesota Press, 2019) provides a new understanding of the role of montage and collage within architectural culture. Montage, it argues, was a cultural technology that architects used to envision experimental assembly processes at a moment when rapid changes in the industrialization of building was changing the character of the architect’s intellectual work. Looking closely at montage practices, it brings to light how architects responded to changes in technologies of photomechanical reproduction that bound architectural culture to more closely to the technics of optical media.

He is currently at work on two projects. Screen Genealogies: From Optical Device to Environmental Media (University of Amsterdam Press, 2019), co-edited with Francesco Casetti and Rüdiger Campe, stems from a two-year Andrew W. Mellon Foundation Sawyer seminar which explored the current explosion of screens from an interdisciplinary perspective. Asking how the current proliferation and transformation of screens demands a rethinking of their histories, the book advances a genealogical approach that recovers the older, pre-optical meanings of screen in order to rethink how screens are today becoming environmental and infrastructural media.

His second book project excavates the transnational articulation of cinema architecture as one of modernism’s crucial, yet scarcely examined undercurrents, through aesthetic, technical, and social biographies of buildings in New York, London, Paris, Casablanca, Amsterdam, Beirut, Sao Paulo, Shanghai and Berlin from the 1920s to the 1960s.​

BOOK CHAPTERS:
“Face and Screen: Toward a Genealogy of the Media Façade,” in Screen Genealogies: From Optical Device to Environmental Media, (University of Amsterdam Press, 2019).

RECENT COURSES:
HSAR 312      Modern Architecture: From Enlightenment to the Millennium

HSAR 401      Critical Approaches to the History of Art

HSAR 747      Architecture and the Kinetic Image

HSAR 688      Rethinking the Situationist International: Architecture and the City