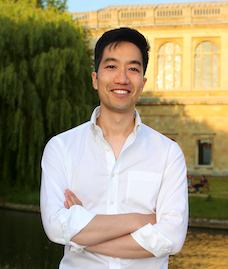 Morgan Ng is a historian of early modern architecture, landscape, and visual culture specializing in Renaissance Italy and its global networks. His scholarship explores the interplay between art and technology; the multisensory perception of the built environment; ecological approaches to architecture; theories of form; problems of historical periodization; and the relationship of the graphic arts to building design and practice.

A driving concern of his research is the conceptualization and interpretation of what he defines as “cognate technologies”: artifacts often distinct in style and function yet connected by deep formal and structural kinships. This project coalesces in his forthcoming book, The Stratified City: Military Architecture in Renaissance Italy. The study probes the close morphological links between fortifications and other works of sixteenth-century art and design: palaces, gardens, and urban infrastructure.

Much of his research also strives to bridge the medieval and early modern scholarly divide. This ambition motivates a future book project tracing the survival and transformation of earlier graphic techniques in the emergent Renaissance practice of architectural drawing on paper. Published and forthcoming articles cover topics such as early modern architectural glass, sculptural illumination, print culture, cartography, and earthquakes.

Before coming to Yale, Ng was a Junior Research Fellow at St John’s College, University of Cambridge, and a postdoctoral scholar at the Getty Research Institute. He has also worked as an architect in New York and Chicago.

SELECTED PUBLICATIONS:
“The Renaissance Superstructure,” Journal of the Society of Architectural Historians (forthcoming).

“Gunpowder Grottoes: Seismology and the Subterranean Landscape in Renaissance Italy,” in The Three Natures: Gardens and Landscapes of the Italian Renaissance, ed. Anatole Tchikine, (University of Pennsylvania Press, forthcoming).

“‘An impression made on the ground, or dust, or even paste or snow’: Mediums of Architectural Drawing at the Dawn of Paper-Based Design,” in Building with Paper: Rethinking the Materiality of Renaissance Architectural Drawings, ed. Cara Rachele and Dario Donetti, (Brepols, 2021), 15–37.

“Illuminated Sculpture and Visionary Experience at the Cardinal of Portugal Chapel in Florence,” in The Art of Sculpture in Fifteenth-Century Italy, ed. Amy Bloch and Daniel Zolli, (Cambridge University Press, 2020), 239–58.