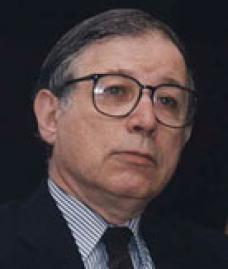 We mourn the loss of Walter Cahn, a distinguished scholar of medieval art who served as teacher and mentor to generations of Yale students from1965 until his retirement in 2002.

His son Claude has kindly provided an outline of Walter’s early life which was marked by tragic events. Born in Karlsruhe, Germany in 1933, he was five when the family’s home was seized by the Nazis in 1938. They were expelled to Vichy France in 1940. In 1941, Walter and his brother Norbert were placed for safety at a children’s home in Moissac, renowned for its Romanesque abbey. The following year, their parents, Otto and Frieda Cahn, were deported, eventually arriving at Auschwitz, where they were murdered. During the period 1943-1945, Walter and his brother lived in hiding places provided by the French resistance, fitfully attending local primary schools. He moved from one hiding place to another all over France, including a period as a shepherd in the southeastern part of the country. After the war his secondary education continued at the Collège de Moissac.

In January 1947, Walter and Norbert emigrated to the United States, to live in Brooklyn with relations. From 1948 to 1952, he attended the School of Industrial Arts (now School of Art and Design) in New York, and he studied design at the Pratt Institute in 1952-56. Following military service in 1956-58, Walter undertook graduate study in the history of art, at the Institute of Fine Arts, NYU, where he competed his Ph.D. in 1967, with a dissertation a twelfth-century Romanesque Bible. His doctoral dissertation was published in 1976 as Romanesque Wooden Doors of Auvergne.

Walter came to Yale in 1965, becoming an Assistant Professor in 1967, Associate Professor in 1968 and full Professor in 1976. 1986 saw him named Carnegie Professor of the History of Art, a position he held until his retirement in 2002. He several times served as Chair of the Yale Art History Department. Among many distinctions, he served as Editor-in-Chief of Art Bulletin (1988-91), held a Fulbright Fellowship in Paris (1962-63) and a John Simon Guggenheim Fellowship (1981). In 2014 Walter was elected Fellow of the American Academy of Arts and Sciences.

Along with his book on carved wooden doors in twelfth-century France, his monographs include Romanesque Bible Illumination (1982), which remains an essential starting point for work on medieval manuscript arts, and Masterpieces: Chapters in the History of an Idea (1988), which locates the eponymous concept in the practices of medieval guilds and charts its vagaries over time. Throughout his career, he explored Jewish themes both in and beyond the medieval field, from a 1967 study of a late medieval Haggadah to a 2007 essay the German Jewish painter Max Liebermann (2007). His influence in the field was recognized in a collection of essays by distinguished scholars, Romanesque Art and Thought in the Twelfth Century: Essays in Honor of Walter Cahn, edited by Colum Hourihane, which was published in 2008.

Prof Jacqueline Jung writes: “When I first met Walter Cahn after arriving in Yale in 2007 I was surprised, because his personal presence – small of stature, with a soft voice, twinkling eyes, and extremely gracious, gentle way of speaking – belied the titanic presence he had in our field. He made a great impact in his publications – his monographs as well as his abundant, wide-ranging smaller essays – which both illuminate historical content that at first seems difficult to understand and demonstrate exemplary art historical methods. Even when drawing heavily on textual accompaniments or analogues, his analyses always centered on the visual forms of the materials and the modes of looking or thinking they demanded, and were always timely without being trendy. Beyond his publications, which remain staples of our medievalist graduate students’ reading lists, Walter Cahn’s impact is palpable in the way his teaching and mentorship shaped the field of Medieval Art History and Medieval Studies more broadly. The scholars who emerged from Yale’s graduate program under his guidance – they include Jill Caskey (University of Toronto), Jeffrey Hamburger (Harvard), Zsombor Jékely (Museum of Fine Arts, Budapest), the historian Sara Lipton (SUNY Stony Brook), Robert Maxwell (NYU), Elizabeth Sears (University of Michigan), and many more – have themselves gone on to be field-shaping forces in North America and Europe, expanding our areas of inquiry in fruitful and exciting ways while retaining his commitment to close empirical engagement and historical sensitivity. Walter Cahn’s life and intelligence continues to sparkle through both his own enduring work and through the scholars who carry it forward.”

Among his many accomplishments was a fellowship at the J. Paul Getty Museum in the summer of 1986, where he met Prof Robert Nelson, also a fellow, for the first time.  Rob writes: “Peg and got to know Walter and Annabelle that summer.  We all lived in an odd LA apartment building from the 1920s with a faux wood beamed ceiling in a lobby filled with period furniture—medieval/early modern fake furniture.  It was like the set of a historical film from the silent era.  That summer, Walter was solicitous of my work, like he was of everybody’s.  Tom Kren, then the head of the Getty Manuscript Department, had invited invited us both.  Tom must have studied with Walter at Yale and was well aware of his erudition; I have no idea how I got in that company.    Walter was a giant in the medieval field.  His publications were numerous—all, alas, currently not available because of the Quarantine.  His many students occupy important professorships in this country.  Walter made Yale one of the most important places to study medieval art in this country or any other.  He will be missed.”

Professor Judith Colton, who taught alongside Walter for decades at Yale remembers that, despite his fragmented early education, Walter “turned out to be the most learned person most of us had ever come across – and one of the most generous as well.”  Yet, as Judith recalls, “He wore that wisdom lightly. For example, once when he was Chair, mice were found in the Chair’s office. Walter sent out a memo, from the mice, giving us their impressions of a department meeting. And then there was the end-of-year party in the Sculpture Garden of the Gallery when we were bidding farewell to a young colleague. Walter showed up convincingly dressed as Charlie Chaplin, complete with bowler hat and mustache, and proceeded to do a full stand-up, silent, act, using placards, that had us all in stitches.” Walter was also deeply musical. The old slide library would resound as he whistled complex melodic phrases from Richard Strauss and Gustav Mahler.

Walter was married to Annabelle Simon on in 1960; their son Claude was born in 1968. Annabelle died in 1996. In 2001 Walter married Brenda Lee Danet who passed away in 2008.  He is survived by his partner Rosalyn Muskovits, his son Claude, daughter-in-law Cosmina, and two grandchildren Johannah and Sarah. A memorial service for Walter will be held in the Spring or Summer of 2021. He was gentle, mischievous, and a brilliant scholar and teacher. We feel his loss deeply.