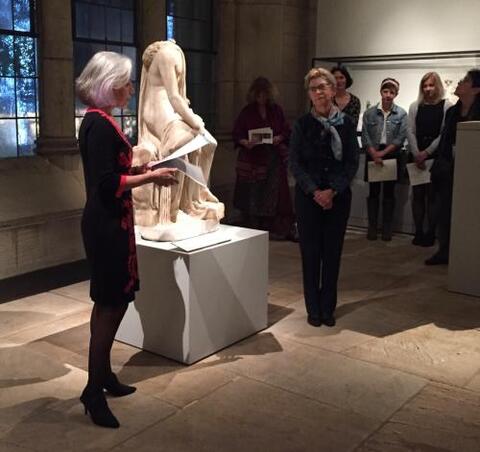 On November 28th the Department of History of Art and Yale University Art Gallery held an event to pay tribute to Mary Miller, Sterling Professor of the History of Art, who is leaving Yale to become Director of the Getty Research Institute.

Kindly hosted by Susan Matheson, Molly and Walter Bareiss Curator of Ancient Art at Yale University Art Gallery, who offered a welcome in the spectacular setting of the sculpture hall, this was not a formal academic event. Rather it was a family party, to pay tribute to a friend, colleague and mentor to generations of students in the Department, where she completed her PhD and began teaching in 1981. Mary has held many roles at Yale including being an exemplary Chair of the History of Art Department, a much-loved Head of Saybrook College, a reforming Dean of Yale College and most recently the Senior Director of the Institute for the Preservation of Cultural Heritage.

We congratulate Mary on her spectacular appointment as Director of the Getty Research Institute, where she will doubtless be a benign monarch of the white castle upon the hill in Bel Air. Let’s not miss the significance of this position. The Getty’s visionary hire marks this leadership role being held for the first time by a scholar of art from outside the European tradition, and for the first time by a woman. This could not be more appropriate. Throughout her career, Mary Miller has been the most powerful and compelling of advocates for her subject area, thrilling, delighting and engaging generations of Yale students with Pre-Columbian art, using the collections in this museum. But crucially, she has also been a mentor and role model to generations of women at Yale and beyond, her students and junior colleagues, who have now themselves moved on to leadership roles. She has spoken up for representation of the ancient civilizations of the Americas and for Latin America, as strongly as she has advocated for Latina/Latino students at Yale and beyond.

It’s notable that while Mary Miller’s contributions to the field began with a highly-regarded scholarly monograph on the Murals of Bonampak, based on her dissertation, her acclaimed work with Linda Schele, Blood of Kings, which earned the Alfred Barr Award for Distinguished Museum Scholarship, set her on a path to write for both fellow scholars and the general public. Hundreds of thousands have seen her exhibitions, including Maya Art: Blood of Kings, at the Kimbell Art Museum in 1986 and Courtly Art of the Ancient Maya at the National Gallery of Art and in San Francisco and many more.

While doing all this Mary quite literally wrote the textbook for her field. The Art of Mesoamerica: From Olmec to Aztec has a sixth edition now in production, while Maya Art and Architecture has a second edition prepared with former Yale student Megan O’Neil. Collaboration is, indeed, second nature to Mary Miller; think of Painting a Map of Mexico City (a co-edited publication with Barbara Mundy, based on a Beinecke object) and The Spectacle of the Late Maya Court: Reflections on the Murals of Bonampak (with Claudia Brittenham).

For many of us it’s impossible to think of a Yale without Mary Miller and if I may indulge myself with one of my favorite memories, it’s thinking of the old faculty meeting room – where the dreaded orals exams would take place. Mary would emerge from the old slide library with a massive pile of cards, on each of which was attached a black and white photograph of a pre-Columbian sculpture. She would enter the room, bring the pile of photographs down on the table, and ask one question: “place them in chronological order!”  For the next fifteen minutes, the students would assemble a visual history of Aztec or Maya art. Sometimes a misplaced image would cause Mary to wince visibly, giving the student a clue that they were approximately 500 years out on their dating. It was a wonderful tribute to Mary’s visionary teaching, her use of objects, and her authoritative and lucid grasp of the history of the Americas, that the end result was always a narrative line as clear as that in her own publications.

The evening continued with a series of short tributes from people whose lives Mary has touched in her Yale career; the first speaker is in his ninetieth year, and the last, a current Yale student, almost seven decades younger. Each offered most touching and eloquent contributions.