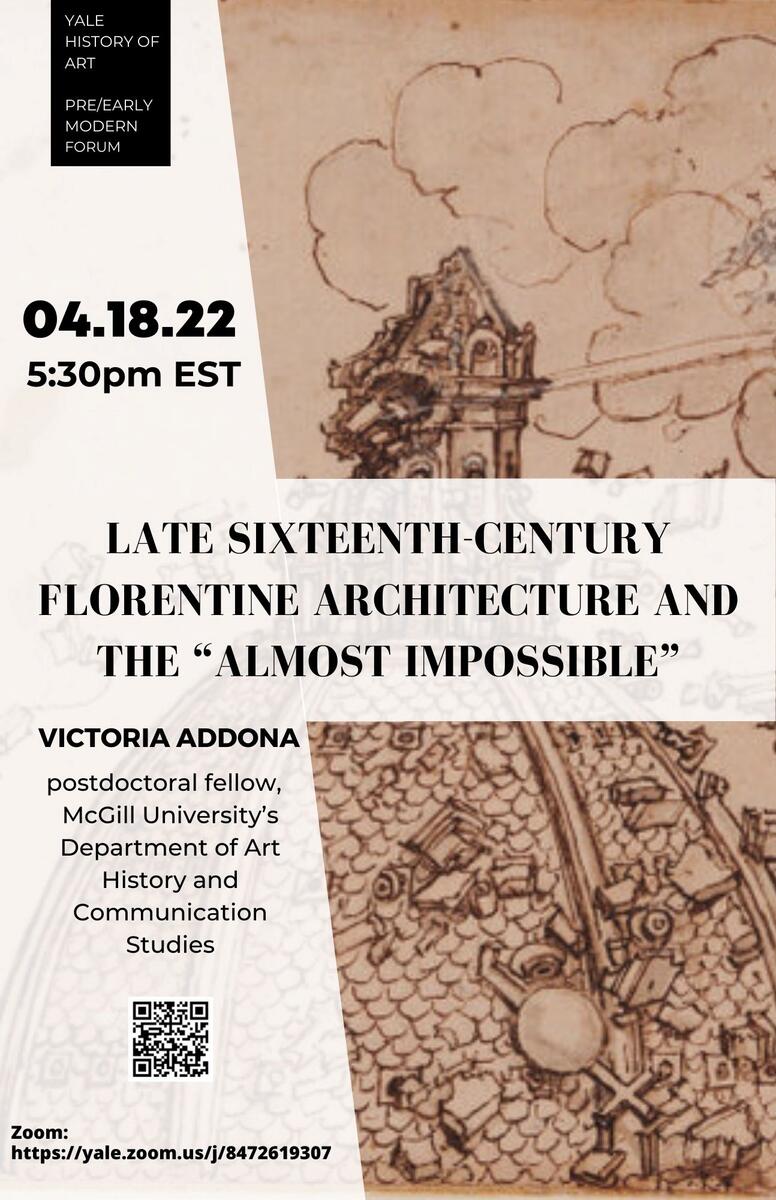 The Pre/Early Modern Forum is delighted to announce the upcoming talk by Victoria Addona, a postdoctoral fellow at McGill University. The event will take place on Zoom (https://yale.zoom.us/j/8472619307) on April 18th at 5:30pm EST.

Victoria Addona’s talk is titled “Late Sixteenth-Century Florentine Architecture and the ‘Almost Impossible,’” an abstract of which is included below:

Early modern Florentine architects and engineers often described the impact of natural phenomena on civic infrastructure as “almost impossible” to comprehend. From floods and earthquakes to strikes of lighting, the terrible and fugitive forces of nature seemed to evade perception, representation, and reasoning. Curiously, court chroniclers employed the same phrase— “almost impossible”—to describe the simulation of natural phenomena in early modern theatrical productions. This talk explores the rhetorical conceit of the “almost impossible” to consider the ways that late sixteenth-century Florentine architects translated the dynamics of natural phenomena from the built environment to the stage. By tracing their management of the natural world across building practices, I emphasize the key role they played in reshaping a cultural imaginary of nature as a domain to be conquered by human intervention.

Victoria Addona is a postdoctoral fellow in McGill University’s Department of Art History and Communication Studies, where she is completing a book tentatively titled Bernardo Buontalenti and the Art of the Impossible. A specialist of early modern Italian art and architecture, she received her PhD from Harvard University and held fellowships at Villa I Tatti, the Medici Archive Project, and Sir John Soane’s Museum. Forthcoming articles in I Tatti Studies, The Journal of Architecture, and Nuncius explore her interests in early modern architecture and nature, focusing on issues of architectural mobility, as well as practical and theoretical approaches to architectural preservation.