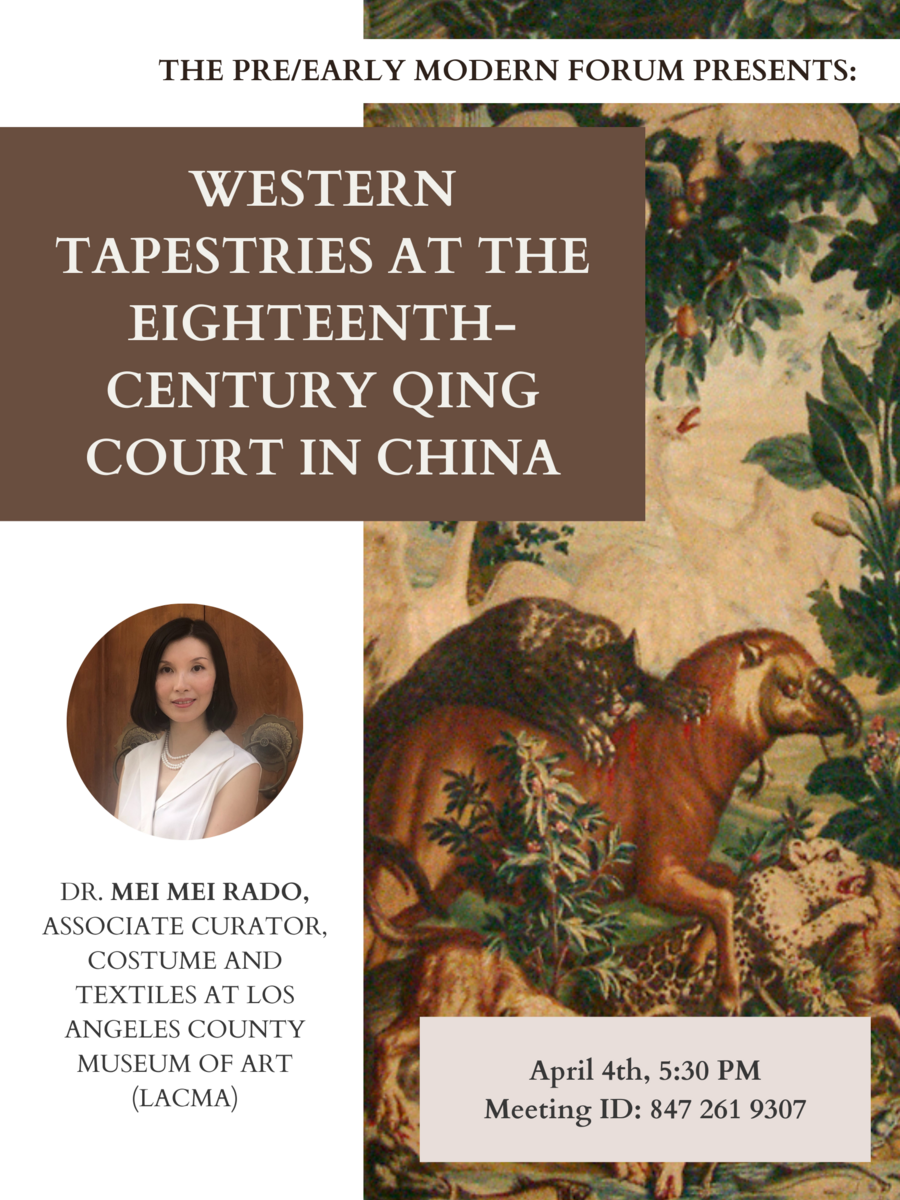 Dr. Rado’s talk is titled “Western Tapestries at the Eighteenth-century Qing Court in China,” an abstract of which is included below:

This presentation draws from my book manuscript The Empire’s New Cloth: Western Textiles at the Eighteenth-Century Qing Court. In the early modern period, large-scale pictorial tapestries ranked among the most precious form of textile, playing versatile roles in diplomatic exchanges and political negotiations. While the circulations and functions of tapestries at European courts during the seventeenth and eighteenth century have been well studied, less known are their roles in mediating the diplomatic and cultural exchanges between China and Europe as well as their impacts on the Qing court’s textile productions and arts. The first part of this talk uncovers the history of European tapestries that entered the Qing court, including the first and second Tentures chinoises woven by the Beauvais Manufactory and the Tenture des Indes made by the Gobelins Manufactory. Reconstructing their stories from both the European and Qing sides offers a window into complex cultural encounters as contingent trajectories replete with unexpected turns. In particular, these tapestries’ themes, marked by idealized exoticism compressing distance and time, became a sort of diplomatic lingua franca adaptable to express different visions and intentions. The second part of this presentation examines how Qing imperial encounters with European tapestries gave rise to a new type of textile production in the Qing imperial workshops and an innovative mode for furnishing the palace interiors. The medium’s architectonic tension and interactive visual force enabled the Qianlong emperor to envision his own physical presence in relation to the tapestry in space and offered him new ways to reenact fictional narratives charged with imperial significance.

Dr. Mei Mei Rado is Associate Curator of Costume and Textiles at Los Angeles County Museum of Art. She received her MA from University of Chicago and PhD from Bard Graduate Center. She specializes in textiles and dress of both China and France from the eighteenth to the early twentieth century, with a focus on transcultural exchanges. Prior to joining LACMA, she has held research and curatorial positions at the Institut national d’histoire de l’art (Paris), the Textile and Costume Division at the Palace Museum (Beijing), as well as the Department of European Sculpture and Decorative Arts and the Costume Institute at the Metropolitan Museum of Art. Dr. Rado has published widely in academic journals and edited volumes. Her research has been supported by the American Council of Learned Society and the Society of Antiquaries of London, among other organizations. Her forthcoming book is titled The Empire’s New Cloth: Western Textiles at the Eighteenth Century Qing Court.