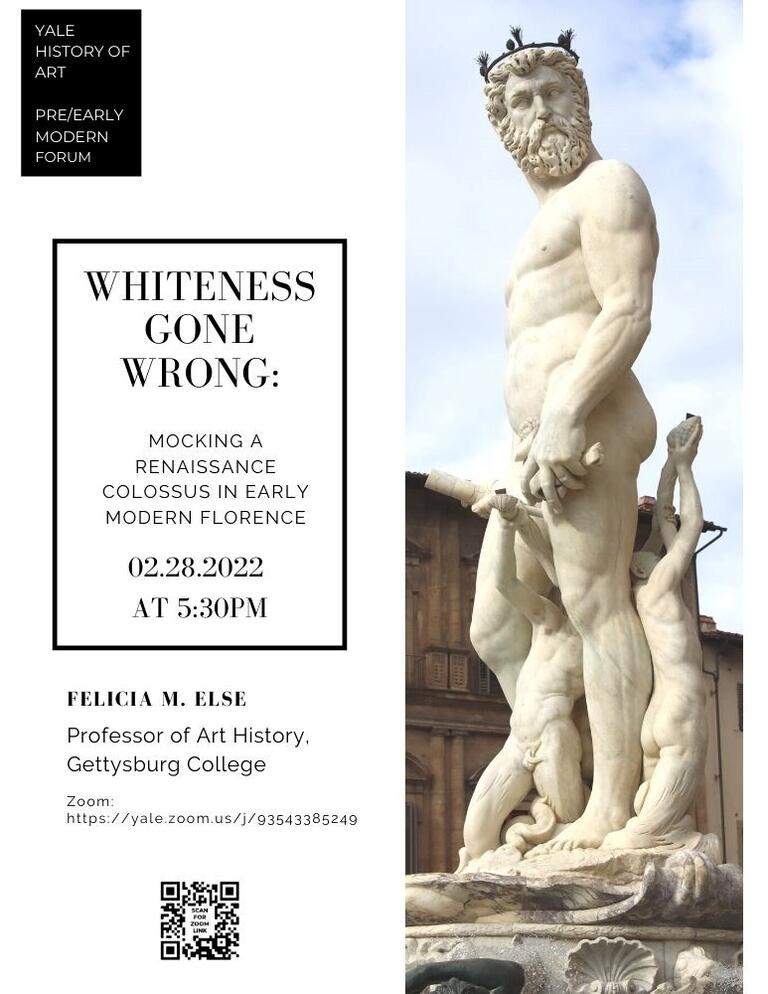 The Pre/Early Modern Forum is delighted to announce the upcoming talk by Dr. Felicia M. Else from Gettysburg College. The event will take place on Zoom (https://yale.zoom.us/j/93543385249) on February 28, 5:30pm EST.

Dr. Else’s talk is titled “Whiteness Gone Wrong: Mocking a Renaissance Colossus in Early Modern Florence,” an abstract of which is included below:

The monolithic white marble colossus has long been a mainstay of the heroic tradition of Renaissance Florence, exemplified by Michelangelo’s David in the Piazza della Signoria. This talk looks at a different 16th-century “giant” from the same square, Bartolomeo Ammannati’s Neptune, centerpiece of an elaborate public fountain. This statue acquired a nickname, “Biancone”, meaning “Big White One”, a clever epithet that mocks its subject with the very qualities that should have made it a success. In seeking the origins of this nickname, I explore how contemporaries poked fun at such works, looking at the flip side of “giants” and their role in the more irreverent world of popular culture and the carnivalesque. I examine the juxtaposition of giants and dwarfs for comic and satirical effect as well as the antagonistic character of “Biancone” in a 17th century mock heroic epic by Lorenzo Lippi. Annotations to Lippi’s text show “Biancone” to be one of many words and phrases taken from the Florentine vernacular, perhaps giving insight to popular oral culture often lost in the historical record and showing us a vivid case of how whiteness can go wrong.

Felicia M. Else is a Professor of Art History at Gettysburg College, PA. She has published on Bartolomeo Ammannati’s architecture and sculpture in Burlington Magazine, Sixteenth Century Journal, Sculpture Journal and Oxford Bibliographies in Art History as well as interdisciplinary studies on water, cartography, aquatic imagery and festivals, including a book, The Politics of Water in the Art and Festivals of Medici Florence: From Neptune Fountain to Naumachia with Routledge Press. She has a forthcoming article on representations of water management in Medici Florence as part of a volume on Disaster in the early modern world. This study comes from a book she is co-editing, Giants and Dwarfs in European Art & Culture, c. 1350-1700: Real, Imagined, Metaphorical under contract with Amsterdam University Press’ Series Monsters and Marvels. Alterity in the Medieval and Early Modern Worlds.