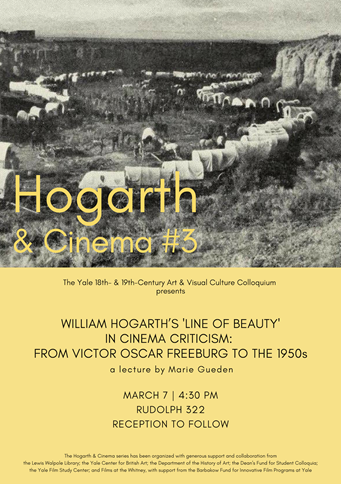 Please join the 18th- and 19th-Century Art and Visual Culture Colloquium for the third event of our series dedicated to the British painter, printmaker, and theorist’s legacy in film.

On March 7, Marie Gueden, a PhD candidate in film studies at Université Paris 1 will discuss the influence of William Hogarth in cinema criticism. This lecture will address the work of Victor Oscar Freeburg, an influential writer, painter, and academic – notably one of the first professors of film composition at Columbia University, where he taught between 1915 and 1917. Between 1918 and 1923, Freeburg published two books that aimed to elaborate a theory of photoplay composition based on Hogarth’s ‘line of beauty’, a concept the artist developed in The Analysis of Beauty. This book, initially published in 1753, is now recognized as the first formalist treatise written in English.

Based on her extensive archival research in film magazines from the 1930s-50s, Marie Gueden will also provide an overview of Hogarth’s theoretical influence on American film criticism, demonstrating the widespread use of the continuous line of beauty as guiding principle for theories of composition in professional and amateur cinema, as well as television. Her lecture will be interspersed with clips from films and visual material that are quite rare, so you won’t want to miss it!

This event is free and open to the public and will be followed by a reception. We hope to see many of you there!