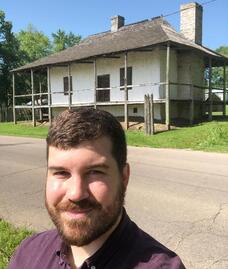 Philippe Halbert studies the intersections of art and identity in the colonial Americas and early modern Europe. He is especially interested in performative dimensions of creole subjectivity and self-fashioning that center the body or representations thereof. Drawing from an epistolary exchange between a Canadian woman and her French son-in-law in Louisiana, Philippe’s dissertation considers the extent to which their correspondence reveals larger modes of cultural mobility, imperial encounter, and racialized difference from France to New France and back. This project has received generous support from Yale, The Historic New Orleans Collection, Tulane University’s New Orleans Center for the Gulf South, the Terra Foundation for American Art, the McNeil Center for Early American Studies at the University of Pennsylvania, and the American Council for Québec Studies.

A graduate of the College of William and Mary and the Winterthur Program in American Material Culture at the University of Delaware, Philippe is a co-founder of the Yale French North American Studies Working Group and Materializing Race: Objects and Identity in #VastEarlyAmerica. He has held curatorial positions at institutions including the Colonial Williamsburg Foundation, the musée du Louvre, the Philadelphia Museum of Art, the J. Paul Getty Museum, and the Yale University Art Gallery. In addition to courses taught at Yale, he has led field studies and run workshops for the National Institute of American History and Democracy at William and Mary, the Omohundro Institute of Early American History and Culture, and Historic Deerfield. A contributing editor at The Junto Blog, he most recently contributed essays and catalogue entries to Rococo Ébénisterie at the J. Paul Getty Museum (Getty Publications, 2021) and A Voice on Its Own: Appropriation and Invention in the Arts of Spanish America (Denver Art Museum, forthcoming), as well as French translations for bilingual interpretative signage at Natchez National Historical Park in Natchez, Mississippi.