Mia Kang is an art historian, poet, and arts administrator. Her dissertation, “Art, Race, Representation: The Rise of Multiculturalism in the Visual Arts,” examines the contested rise of U.S. multiculturalism and its unresolved legacies. Recent publications include contributions to Roxy Paine: The Dioramas (Skira, 2021), The Life and Times of Alvin Baltrop (Skira, 2019), Sanford Biggers: Codeswitch (Yale University Press, 2020), Published by Lugemik: Printed Matter from 2010-2019 (Lugemik, 2019), and Plot magazine. Formerly a Mellon Mays Undergraduate Fellow, she teaches as a lecturer at Cooper Union and Hunter College, CUNY, her alma mater.

Kang currently serves as interim director for the Museo del Westside, a new community-based museum focused on the history and culture of San Antonio’s Westside, formed as a primarily working class and immigrant barrio around the turn of the century. She is leading a $3.5 million capital campaign to support the rehabilitation of ten buildings at the Rinconcito de Esperanza, a designated historic district. The site includes the former Ruben’s Ice House, soon to be the new physical home of the Museo del Westside. The Museo’s inagural exhibition, Historias del Westside, organized by Kang and opening in 2022, was recently awarded support from the National Endowment for the Humanities.

Kang has also published widely as a poet. She is the author of the pamphlet City Poems (ignitionpress, 2020), and she was named the 2017 winner of Boston Review’s Annual Poetry Contest. Her poetry has appeared in journals including POETRY, Pleiades, Poetry Northwest, and PEN America. She has received awards from the Academy of American Poets, the Fine Arts Work Center in Provincetown, and the Millay Colony for the Arts. Her current poetics/performance project, “Theresa, I Miss You,” is dedicated to Theresa Hak Kyung Cha. www.miaadrikang.com. 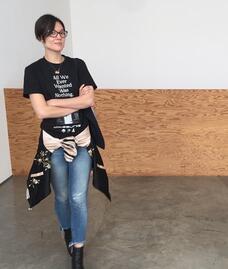