Cécile Fromont - I am a professor in the history of art department at Yale University. My writing and teaching focus on the visual, material, and religious culture of Africa and Latin America with a special emphasis on the early modern period (ca 1500-1800), on thePortuguese-speaking Atlantic World, and on the slave trade.

My first book, The Art of Conversion: Christian Visual Culture in the Kingdom of Kongo was published in 2014 by the University of North Carolina Press for the Omohundro Institute for Early American History. It received the 2017 Arts Council of the African Studies Association Triennial Arnold Rubin Outstanding Book Award, was named the 2015 American Academy of Religion Best First Book in the History of Religions, won the 2015 Albert J. Raboteau Prize for the Best Book in Africana Religions, an Honorable Mention in the 2015 Melville J. Herskovits Award of the African Studies Association, and a College Art Association Millard Meiss Publication Fund Grant. It has been translated into French by Les Presses du Réel in 2018.

Forthcoming from Penn State University Press in 2022, my next book, Images on a Mission in Early Modern Kongo and Angola presents and analyzes for the first time a set of unpublished and unparalleled images from seventeenth and eighteenth century Kongo and Angola created within the Capuchin Franciscan mission to the region. Not only does it shed new light on early modern central Africa and on the little studied Capuchin missionary endeavors outside of Europe. Its novel methodological approach also models a way to look anew at encounter as author in images created at the crux of cultures.

I am the editor as well as a contributor to the 2019 volume Afro-Catholic Festivals in the Americas: Performance, Representation, and the Making of Black Atlantic Tradition published in the Africana Religion Series at Penn State University Press. My essays on African and Latin American art have appeared, among other venues, in the Journal of the American Academy of Religion, Colonial Latin American Review, African Arts, Anais do Museu Paulista, RES: Anthropology and Aesthetics, Art History as well as various edited volumes and exhibition catalogues.

Support for my research and writing include grants and fellowships from the Center for Advanced Study in the Visual Arts, the Michigan Society of Fellows, the J. William Fulbright Foreign Scholarship Board, the Yale Institute of Sacred Music, the Renaissance Society of America, and the Paris Institute for Advanced Studies. I am a 2018 Rome Prize fellow of the American Academy in Rome. In Spring 2022, I am a fellow at I Tatti – The Harvard University’s Center for Italian Renaissance Studies in Florence.

I am currently pursuing two lines of research investigating areas of intersection between visual and material culture, religion, and knowledge creation in cross-cultural environments of early modern Africa, Latin America, and Europe. The first is an investigation of the circulation of African visual, material, and religious culture in the context of the slave trade within the early modern Atlantic world which was the topic of my 2020 Cohen Lectures at Harvard’s Hutchins Center. In the second, emerging line of study, “Connected by Design” I investigate material and aesthetic exchange between Africa and Europe in the era of the slave trade.

At Yale, I advise emerging scholars in our graduate program whose research explores different aspects of the visual and material cultures of Africa, Latin America, and the Atlantic World in the early modern period and the long shadow this era cast on our contemporary times.

I was born and raised in Martinique. My ancestors came to the island from Africa, South Asia, and Burgundy.

“The Taste of Others: Finery, the Slave Trade, and Africa’s Place in the Traffic in Early Modern Things” In Early modern things: objects and their histories, 1500-1800, 2nd edition, edited by Paula Findlen, 273-292. Abingdon: Routledge, 2021

“Paper, Ink, Vodun, and the Inquisition: Tracing Power, Slavery, and Witchcraft in the Early Modern Portuguese Atlantic.” Journal of the American Academy of Religion, 88, 2 (2020): 460-504.

“Under the Sign of the Cross in the Kingdom of Kongo: Religious Conversion and Visual Correlation in Early Modern Central Africa.” RES: Anthropology and Aesthetics, 59-60, (2011): 109-123. 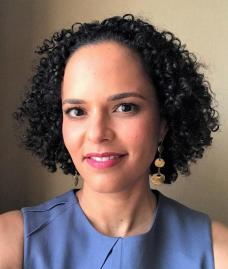 Afro-Catholic Festivals in the Americas
2019