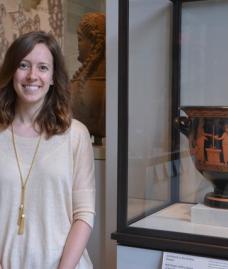 Carolyn M. Laferrière is a Postdoctoral Associate with Archaia as well as a Lecturer in the Departments of the History of Art and Classics. She earned her Ph.D. in 2017 from Yale University, in the Department of History of Art. She was a visiting scholar in the Faculty of Classics at Oxford University in 2015, and a Student Associate Member at the American School of Classical Studies in 2016-17. She has also studied at the University of British Columbia for an M.A. in Classical and Near Eastern Archaeology (2010), and Carleton University for a B.A. in Art History and Classics & Religion (summa cum laude, 2008).

She works on Archaic and Classical Greek art and archaeology, giving particular attention to the relationship between art and ritual. Her current book project, Seeing the Songs of the Gods: Divine Music in Archaic and Classical Greek Art, examines the significance of divine music, exploring how the sounds of divine music are communicated in a visual medium and the subsequent effect that images of divine musical performance had upon the ancient viewer. She is also at work on a number of articles, including the soundscape of the Vari Cave, the relationship between art criticism and music theory in scenes of Apollo Kitharoidos, the intersection of art and myth in ancient musical education, and the depiction of black-figure vases embedded within red-figure painted scenes and their ability to evoke and elaborate upon the sensory experience of the symposium.

In 2018-19, she organized the Archaia Ancient Societies Workshop, a year-long series that investigated “Sensory Experiences in Ancient and Premodern Ritual,” as well as a one-day workshop, “New Approaches for Studying the Past.” She is the co-President of the Archaeological Institute of America New Haven Society, a member of the AIA Societies Committee, and an AIA Lecturer for the 2019-2020 academic year.

She recently curated an exhibition, Sights and Sounds of Ancient Ritual, which was on view at the Yale University Art Gallery from November 9, 2018 to March 3, 2019. The exhibition took a sensory approach to its investigation into ancient ritual practice by focusing upon objects that would have engaged the worshippers’ senses of sight and sound, since both visual and sonic modes of perception were routinely enhanced within religious ritual. The exhibition included objects from cultures representative of the entire ancient world, including Mesoamerica, the Mediterranean, Egypt, the Near East, India, and Asia. Each object depicts the divine, features representation of religious ritual, or was itself used within ritual. By displaying these objects together, the exhibition explored points of contact among ancient religious practices, examining how ancient cultures used visually and sonically evocative works of art to create powerful experiences of the sacred.​

In conjunction with Sights and Sounds, she organized a programming event, Sounding Ancient Ritual. Over 100 visitors attended a performance by Barnaby Brown and Stef Conner, who played fragments of ancient music on reconstructed ancient instruments. For more information on this event, see https://artgallery.yale.edu/calendar/events/performance-sounding-ancient-ritual

For more information on the exhibition, see: https://artgallery.yale.edu/exhibitions/exhibition/sights-and-sounds-ancient-ritual

“Sacred Sounds: The Cult of Pan and the Nymphs in the Vari Cave.” Classical Antiquity (Forthcoming 2019).

“Looking at Divine Song: The Aesthetics of Music in Greek Vase-Painting.” The Beauties of Song: Aesthetic Appreciations of Music in the Greek and Roman World, edited by D. Creese and P. Destrée. Cambridge University Press. Forthcoming 2020.